At the molecular level, an oil or fat can go through various chemical processes. Sometimes this happens unsolicited, for example when users heat an oil or fat strongly for frying. Conversion offers the opportunity to change physical and/or chemical properties in order to get new substances with sought after physical and chemical properties with useful functionalities. This is called modification. Oil modification processes full hydrogenation, fractionation and interesterification are used in de food industry to change the solid phase line of an oil. In the oleochemical industry techniques like fat splitting, polymerisation and transesterification are used to create a wide range of products.

Double bonds present in unsaturated triglycerides can be hydrogenated to convert oils (liquid) into fats (solid). During hydrogenation (the fat hardening process), the double bonds of unsaturated fatty acid chains are broken open and a hydrogen atom is instead linked to a carbon atom (C atom). We do this by adding hydrogen in a reactor (at elevated temperature and pressure) and in the presence of the finely divided nickel as a catalyst. At the end of the reaction, the nickel must be removed from the oil again by means of a filtration step. This is a critical step because nickel is a carcinogen. Fortunately, it is quite possible to completely remove the nickel. The oil can then be further cleaned during the refining process. 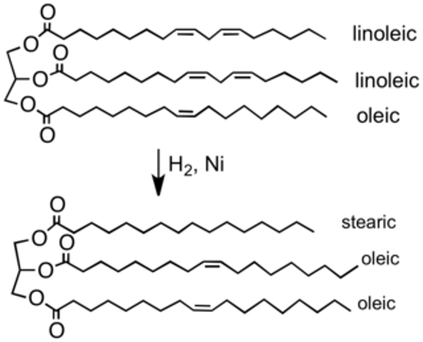 When all unsaturated compounds have disappeared, a saturated fatty acid chain has formed, a hydrogenated fat. In the past, oils were partially hardened (partially hardened) to get a more favorable melting behavior, while making margarine for example. This creates trans fatty acids. Trans fatty acids are bad for your health and that is why we avoid them as much as possible for food applications.

Fractionation is a technology in which a fat is separated into different parts (fractions). Based on the different melting points of the fractions, they are separated and products are created that have the desired functional properties or the desired fatty acid composition. Fractionation is usually used to separate the high-melting (solid) phase and the low-melting (liquid) phase of a basic raw material.

In this process, an oil is cooled until crystals form. These crystals, which consist of triglycerides that no longer dissolve in the rest of the oil, can then be removed from the oil using a filter. This always results in two product fractions, namely the high-melting crystal phase, called the stearin, and the low-melting oil phase, the olein.

In interesterification, the fatty acids in an oil are redistributed over all the triglyceride molecules in the oil. This happens at all positions of all triglycerides. The fatty acids themselves do not change. The aim of interesterification is to obtain different melting and crystallisation properties of the oil with a constant fatty acid composition, or to realise an equally tasty product with a better fatty acid composition.

During the tinteresterification process, these fatty acids are redistributed over the three positions in the molecule. This redistribution does not only take place within one triglyceride molecule, but also between the triglyceride molecules themselves. For tinteresterification, a catalyst is added to the original oil that has been heated in a tank. By adding a catalyst to the starting material, which loosens and reattaches the fatty acids, the different fatty acids in the oil are distributed equally over all three positions. After a certain time, the oil is cooled, after which the catalyst is removed again.

Enzymatic transesterification does not use a catalyst, but an enzyme, a so-called lipase (a fat-splitting enzyme). These lipases work at mild process conditions and low temperatures. As a result, more valuable substances are retained in the oil. In addition, this process produces little waste and is better for the environment because it uses less water and energy in addition to fewer chemicals. The action of the lipases in this process is similar to the way fats are built up in nature, and broken down again in every living being as part of the digestive process.

In fat splitting, the glycerine is separated from the fatty acids. Fatty acids are virtually insoluble in water at normal temperature and pressure, but at 8 to 10 atmospheres and 170 - 189°C they are indeed soluble and the water has a strong saponifying effect, so that about 90% of the fat is converted to fatty acids and glycerine. The enzyme involved in the breakdown of the oil molecule is lipase. Under the influence of lipase, moisture and light, one or more fatty acid residues can split off, forming a diglyceride. The fatty acid molecule will remain dissolved in the oil. Splitting off another fatty acid produces a monoglyceride.

The splitting process is important because of the extensive use of fatty acids in preparing soaps, synthetic detergents, plastieizers, coatings, greases, and many miscellaneous organic derivatives. The fatty acids can then be separated into a solid fraction (stearin) and a liquid fraction (olein). Stearin is used in candles, detergents and textile additives, but also in cosmetics, soap and rubber; Olein is used in lubricants, leather processing products, rubber, lubricants and chemicals for papermaking.

Polymerisation occurs when fat/oil molecules stick together. This reaction requires unsaturated fatty acids and oxygen. The first step is the formation of dimers: two molecules joined together. This is called dimerisation. When a third molecule is added, we speak of trimers and trimerisation, and if this process continues, we have polymers and polymerisation (literally: more molecules). The fat or oil becomes increasingly viscous during polymerisation. The oil also foams and odor and taste deviations can occur because oxygen-containing products and volatile decomposition products are formed. The effect of polymerisation occurs undesirably when frying at high temperatures and is the main reason why frying fats and oils must be replaced after some time of use. Oleochemistry consciously strives for this polymerisation to make products that have certain unique physical properties—such as elasticity, high tensile strength, or the ability to form fibres.

Triglycerides (1) are reacted with an alcohol such as ethanol (2) to give ethyl esters of fatty acids (3) and glycerol (4):

Transesterification is the process of exchanging the organic functional group R″ of an ester with the organic group R' of an alcohol. These reactions are often catalysed by the addition of an acid or base catalyst. The reaction can also be accomplished with the help of other enzymes, particularly lipases. Transesterification is a process that converts fats and oils into fatty acid methyl ester (FAME) and glycerin. FAME is commonly used as a renewable fuel. It's a replacement for petroleum diesel. Glycerin, a co-product, is a sugar commonly used in the manufacture of pharmaceuticals and cosmetics. 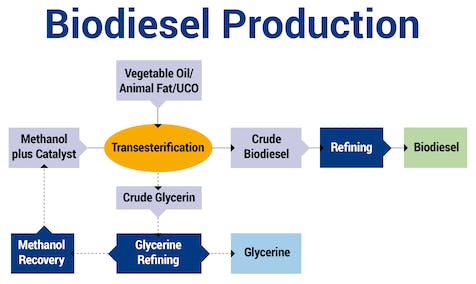