On a world scale, in terms of volume, the Dutch oils and fats sector is the sixth importer and the fifth exporter. Our capacity for crushing (pressing) oil seeds puts us at number four in Europe. The tropical oils, for the most part from oil fruits, are imported in crude form. The main activity in the Netherlands is the crushing of oilseeds and/or the processing (refining, fractionation, hydrogenation and/or transesterification) of crude vegetable oils. In the past decade the refining capacity in the Netherlands has increased, making our refining activities the largest in Europe.

The key role oils and fats play in our economy will increase in the near future due to the rising world population, increased prosperity and  - since vegetable and animal oils and fats are renewable resources - the increasing importance of a biobased economy.

The trade figures stated below relate to 2021. The figures give an impression of the economic value of the companies in the oils and fats industry for the Dutch economy. The figures also show that many companies operate in volatile markets. The war in Ukraine was not yet a factor in 2021.

The oils and fats industry imports a wide range of oilseeds, oils, fats and related products products (including biodiesel and used oils and fats) from more than 100 countries worldwide. Nowadays, important suppliers (by volume) are Brazil (12%), Germany (12%), Belgium (9%), Indonesia (8%), Ukraine (7%), United States (7%), Malaysia (7%) and Argentina (5%) (2021). The 2021 import figures show a volume decrease of more than 5% compared to 2020. However, there was a significant increase in value: from 13.4 billion euros in 2020 to 18.3 billion euros in 2021. This increase can mainly be explained by rising commodity prices. 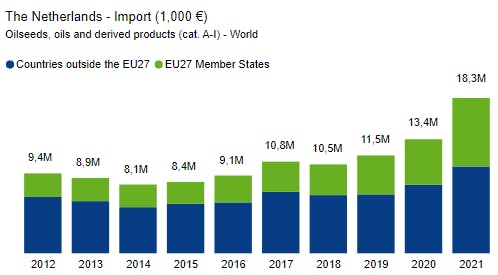 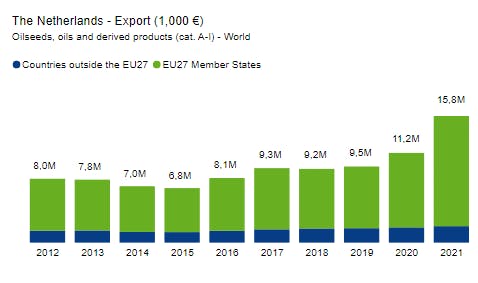 The trade figures show a strong decrease across the board in the Dutch import volume of oilseeds (soybeans, rapeseed, sunflower seed and other oilseeds) from 7.8 million tons to 6.2 million tons (-20%). In percentage terms, rapeseed showed the largest decrease (-39%), with imports of Australian rapeseed, which still accounted for 22% of these imports in 2020, completely lost. The share of Canadian rapeseed has halved from 16% to 8%, while the share of Ukrainian rapeseed has increased sharply (from 27% to 43%). In soybeans, the modest share of the United States (US) is striking. With a share of only 30% in total Dutch imports of soybeans, the US fell back to the low levels of 2012 and 2013. Brazil supplied about 2.4 million tons (58%) of soybeans to the Netherlands in 2021. Despite this sharp fall in the volume of imports, the import value of oilseeds rose from 2.9 billion euros to 3.1 billion euros as a result of price increases.

As with oilseeds, in 2021 there was also a decrease in the Dutch import volume for vegetable oils. This product segment showed a decrease of 10% (from 5.3 million tonnes to 4.7 million tonnes). Although the most important oils, with the exception of rapeseed oil (+4%) and coconut oil (+6%), declined, the decrease in palm oil (from 2.5 million tons to 2.0 million tons) was most significant. Indonesia's share in Dutch imports of palm oil dropped from 24% to 17%. Indonesia also lost a substantial part of its share in palm kernel fat (from 13% to 6%). Malaysia was the main supplier of palm oil in 2021.

In contrast to oilseeds and vegetable oils, the Dutch import volume of biodiesel increased sharply by 20% from 4.0 million tonnes in 2020 to 4.8 million tonnes in 2021. Dutch imports of biodiesel from Argentina, Spain and the UK rose, while China's share in these imports fell sharply (from 12% to 3%). The import of UCOs (used cooking oils), an important raw material for biodiesel, showed a decrease for the first time in 2021 (-11%) after years of increase. Animal fat showed a mixed picture. Both imports and exports showed a significant decrease in animal fats unsuitable for human consumption. The other animal fats and oils, import and export, increased.